2017 is right around the corner and it’s during this time we come up with New Year’s resolutions.  Everyone has something they’d like to change or improve and the new year is a great time to commit to these.  There’s a few things I’d like to change and improve on this new year as well and I believe writing them down is a healthy exercise.

I’ve been listening to Napoleon Hill’s – “The Law of Success” while driving to work each morning. While there’s a ton of things within this great course I’d like to work on, what resonates with me most is the development of a pleasing personality (lesson 10).  The other thing I’m going to work on in 2017 is minimalism.  I simply have too many things. 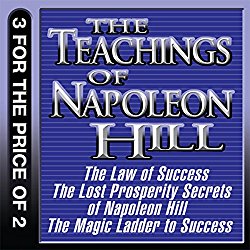 I’ll be honest with myself here, I’ve never really had a pleasing personality but didn’t realize this is an area of my life that needs work.  While I’m not going to bore you with details on how much of an asshole I’ve been most of my life, I am going to recognize my faults and share with you how I came to realize this is an area that needs my attention, and what I’m going to do about it.

What is a Pleasing Personality

A pleasing personality usually may be found in the person who speaks gently and kindly, selecting refined words that do not offend, in a modest tone of voice; who selects clothing of appropriate style and colors that harmonize. One who is unselfish and not only willing, but desirous of serving others; who is a friend of all humanity, the rich and poor alike, regardless of politics, religion or occupation; Who refrains from speaking unkindly of others, either with or without cause; who manages to converse without being drawn into vulgar conversations or useless arguments on such debatable subject as religion and politics; who sees both the good and bad in people, but makes due allowance for the latter; who seeks neither to reform nor to reprimand others; who smiles frequently and deeply; who loves music and little children; who sympathizes with all who are in trouble an forgives acts of unkindness; who willingly grants others the right to do as they please as long as no one’s rights are interfered with; who earnestly strives to be constructive in every thought and deed encourages others and spurs them on to greater and better achievement in their chosen line of work. – Napoleon Hill

Do you know people that can be described by the above?  I do.  Does it describe You?  Doesn’t describe me either but it certainly brought to my attention, that which needs worked on in my own life.  In the book I’ve learned that a pleasing personality can be developed over time and with practice.  It’s something I’m going to work on very hard this year.

Last year I wrote about my 2016 goals and pretty much stuck with them.  I’ve been able to filter the news out of my life entirely which has proven to be a healthy change in lifestyle.  I’ve read and listened to more books of quality.  When watching netflix I tend to watch documentaries rather than movies or shows.  While 2016 was a good year for positive changes, my content creation goals fell short.

I believe that part of the reason I’ve created less than desired in 2016 is because of ‘stuff’ and things.  What I mean by this is material things.  Things that clutter but offer no real fulfillment.

When I walk into my garage I get a headache just because all of the stuff.  I have duplicates of tools, screws, bolts, hand tools, power tools, and generally a basic hardware of stuff… Much of which I can’t find something when I’m looking so I end up at Home Depot to buy another of what I really don’t need.  My office is much the same…. receipts everywhere, electronics, papers, books, and lots of stuff.

The older I get the less stuff I want in my life.  The less high stepping through the garage or office to avoid tripping over unnecessary stuff.  Sure it’s nice to have something when you need to use it but it’s too easy to collect too much junk.  In my case, it’s become overwhelming.  I’m to the place in my life where I’m not sure where to start, but I’m going to start anyway.

Unstuffing my life is going to be a process that I will work on throughout this year and based on the amount of stuff I have, it could take all year to clear it out.  Next year at this time, I’m committing to unstuff my life and take a more minimalistic approach to living. One book that I recommend in regards to this is: Getting Things Done: The Art of Stress-Free Productivity

That’s about it.  I wish all of you a very happy and prosperous new year to come.

Welcome to JustinsBlog.com.  This is my home on the web where I write about Wordpress, domain names, hosting, technology and product reviews.  - serial entrepreneur and Apple fanboy